While on holiday in Brazil I had the opportunity to visit some coworking spaces. My holiday started in Sao Paulo.

As Sao Paulo is the economic center of Brazil it’s no wonder that it’s also the biggest coworking city. With the help of the coworking wiki and the mailing list it was easy to get in touch with two spaces there.

First I visited Ricardo in his Beans! coworking space, which is located close to the Avenida Paulista, one of Sao Paulo’s Business centers. The Space is situated at the end of a narrow courtyard, which faces the Rua Augusta. A large window on the first floor offers the Beans! coworkers a view on the plants that decorate the court yard and a good amount of sunlight in the afternoon. This main room offers space for up to 20 people. The restroom doors are a special eye catcher with their large drawn faces on it. 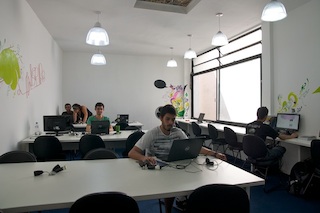 In the lower room, which you pass when entering the space, the receptionist will greet arriving coworkers throughout the opening hours. There you also find the obligatory fax/printer/copy machine and some desktop computer terminals. The meeting room is accessible separately from the outside and offers room for a dozen people.

While I was talking with Ricardo I learned that he first came in contact with coworking when The Hub Sao Paulo opened its doors. His take on coworking is basically less focused on the actual physical space, which could be managed by a third party, but more on the network of people that cooperate and might need a physical space from time to time to get together. So it’s not a surprise that he built his initial coworker base out of his professional online network, which is called Beans!.

Two days and a lot of rain later I visited Fernanda at Pto de Contado in the Jardins district, which is in close neighborhood to Beans!. As things go sometimes I read an interview with Fernanda about her coworking space in the TimeOut Sao Paulo magazine the day before. Nonetheless I was surprised to find that her new space is located at the top level of a small shopping mall. It is her second space she opened in Sao Paulo, her first one is located in Pinheiros, the new downtown of the city. 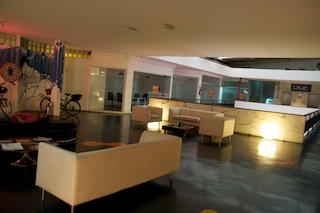 Pto de Contado takes up the entire top level and consists of a spacious room for around 50 coworkers, some small rooms around the floor, which are rented out to small companies, plus 2 meeting rooms. The highlight is certainly the big terrace that offers a magnificent view onto the surrounding neighborhood. If the weather isn’t good enough to sit outside, you can relax on the couches at the center of the level.

Fernanda’s coworking space is equipped with a modern biometric door lock system which allows 24h hour access for all coworkers and the usage is precisely billed per hour. You can buy different monthly hour packages to get a discount.

Fernanda intends to open more spaces in Brazil in the future to help the growing number of innovative, small businesses, as office space in the major cities of Brazil is scarce and expensive. She wants to have a country wide infrastructure ready when the soccer championship takes place in 2014 in Brazil which will bring a lot of traveling business people and give Brazil’s growing economy another push upwards.

At the end of my trip through this awesome country I visited BeesOffice in the beautiful city Rio de Janeiro. It used to be the only space in Rio for some time, but according to Cadu, co-owner of BeesOffice, two more should have opened their doors by now. BeesOffice is located in Centro, one of Rio’s business districts. The Space might be a little hard to find from the outside, but if you ask the warden at the building’s entrance nicely, he will be happy to guide you the way. The space is located on one of the upper floors. 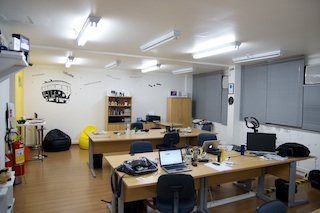 Although it is rather compact, it backs up to 30 coworkers, offers the obligatory meeting room, good coffee and an exercise bike. As you can expect by the name BeesOffice, you can find various incarnations of honey bees around the office. A picture of a surfer bus on the wall and some bean bags invite you to relax in one of the rooms’ corners. BeesOffice charges per hour, too. Prices depend on the season you come and are usually lower during holidays. The space has a very diverse membership base and long time coworkers often exchange services among each other to help with their businesses.

Did you know that Cadu had the initial idea to celebrate coworking day every 9th August? Cadu came to coworking through an article about PTO de Contado when he was in need for an affordable office space for his newly established software company in 2008. To learn more about the coworking movement he met with Jacob from Office Nomads and visited The Network Hub in Vancouver. Unfortunately due to the lack of money Cadu had to postpone his plans until 2010 when he met his now business partner Marcello. Together they raised enough money to rent a space and run advertising campaigns for coworking in Rio, thus laying the ground for more space there.

If you ever happen to be in Rio or Sao Paulo check out the spaces or one of the other at least 14 spaces around Brazil. You will find that the Brazilians are generally very helpful and kind, so it will be a great coworking experience.